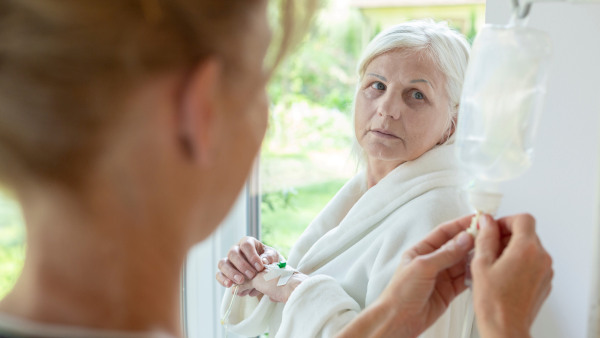 medwireNews: Adding carboplatin to neoadjuvant paclitaxel is sufficient to boost the outcomes of patients with triple-negative breast cancer (TNBC), with no further improvement from the addition of veliparib to the dual regimen, confirms a follow-up analysis of the BrighTNess trial.

Initial results from the trial showed that the primary endpoint of pathologic complete response rate was significantly higher among participants who were randomly assigned to receive veliparib plus carboplatin alongside paclitaxel than those given paclitaxel alone. But the rates did not significantly differ between the triplet and the combination of carboplatin and paclitaxel.

The current analysis – conducted at a median follow-up of 4.5 years and presented by Sibylle Loibl (German Breast Group, Neu-Isenberg) at the ESMO Congress 2021 – provides insight into the secondary endpoints of event-free survival (EFS) and overall survival, with the caveat that these analyses “are descriptive with nominal p values” because only one of the primary comparisons was statistically significant.

A post-hoc analysis demonstrated that EFS was significantly prolonged for patients who received carboplatin plus paclitaxel compared with those given paclitaxel alone, at an HR of 0.57.

The mortality rate was “low” in the trial population, commented Loibl, but the HRs for death favored the triplet and doublet arms over paclitaxel alone, at 0.82 and 0.63, respectively, albeit without reaching statistical significance.

In the randomized phase 3 study comprising 634 women who had not received prior treatment for stage II–III TNBC, veliparib was administered at a dose of 50 mg twice a day, carboplatin at an AUC of 6 mg/mL per min every 3 weeks for four cycles, and paclitaxel at a dose of 80 mg/m2 weekly for 12 weeks. All patients received four cycles of doxorubicin plus cyclophosphamide after completion of the randomized regimens and before undergoing surgery.

The triplet and doublet regimens “had manageable safety profiles,” and were not associated with an increased risk for myelodysplastic syndrome (MDS), acute myeloid leukemia (AML), or other secondary malignancies relative to paclitaxel alone, said Loibl.

The overall rates of secondary malignancies were 2%, 4%, and 3%, respectively.

“These findings support the inclusion of carboplatin in neoadjuvant chemotherapy for stage II-III TNBC,” concluded Loibl.

A selection of topical peer-reviewed articles from the Adis journals, curated by the editors.