Cutaneous T-cell lymphomas (CTCL) are a heterogeneous group of T-lymphocyte malignancies that primarily present in the skin. Mycosis fungoides (MF), the most common subtype of CTCL, presents as erythematous patches and plaques with indolent clinical behavior. Occasionally, disease may progress to tumors, and nodal or visceral involvement. Sézary syndrome (SS), the leukemic form of CTCL, presents as erythroderma – often with severe pruritus. Clinical staging is based on the skin involvement (tumor), node, metastasis, and blood (TNMB) system and more advanced stages are associated with poorer prognosis [1]. Initial workup for patients with suspected MF/SS requires skin biopsy, which is the gold standard for diagnosis. Evaluation of the biopsies may include immunophenotyping and evaluation for clonal T-cell receptor gene rearrangements. Additional staging procedures may include peripheral blood flow cytometry, imaging, and, in rare cases, bone marrow biopsy. 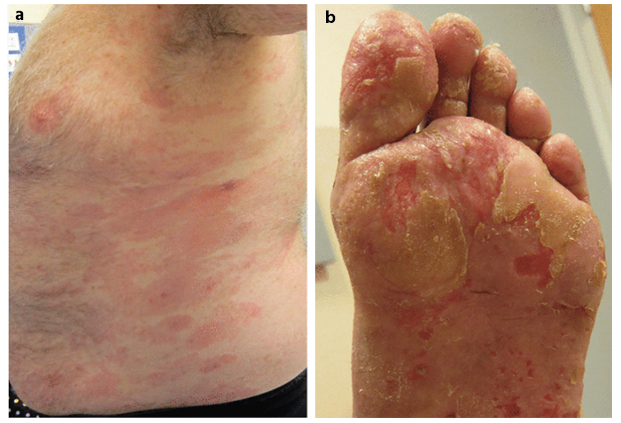 To date, the only curative treatment for CTCL is allogeneic bone marrow transplantation, which is only suitable for a small subset of patients. Therefore, treatment is instead focused on symptomatic management. Choice of treatment is based on the subtype of CTCL and stage of disease at diagnosis [2]. Treatments can be divided into skin-directed therapies (SDTs) and systemic therapies.

For early-stage disease, SDTs are first-line options, and the mainstays of treatment include corticosteroids, ultraviolet light therapy, topical bexarotene gel (Targretin® gel), and topical mechlorethamine gel (nitrogen mustard gel; Valchlor®) (Table 1). Topical steroids and UV light therapy are common therapies for MF, used off-label for this indication. Topical bexarotene gel was FDA-approved in 2000 for refractory or persistent early-stage CTCL and had a response rate (RR) of 54% in early stage disease [3]. Mechlorethamine gel was FDA-approved a decade later in 2013 after the gel was found to have a CAILS RR of 60%, comparable to the ointment formulation in a non-inferiority trial [4]. Mechlorethamine and bexarotene gels have not been compared head-to-head in a randomized clinical trial.

Numerous topical agents are currently under investigation for early stage CTCL, and results are pending from these clinical trials.

Advanced disease is usually treated with systemic therapies in conjunction with SDTs for symptomatic relief (Table 2). Systemic therapies can be divided by class and mechanism of action, and can be used as monotherapies or in combination [8]. There are limited effective and durable treatment options for patients with advanced disease, and a lack of controlled trials comparing the different agents head-to-head. FDA-approved agents include oral bexarotene (Targretin®)[9], denileukin difitox (ONTAK®) [10], extracorporeal photopheresis (ECP; THERAKOS® CELLEX® Photopheresis System) [11], and HDAC inhibitors  such as vorinostat (Zolinza®) [12] and romidepsin (Istodax®) [13], among others.

In 2009, the chemotherapeutic agent pralatrexate (Folotyn®), an antimetabolite folate analog, was approved by the FDA for the treatment of patients with peripheral TCL. Compendial approval for transformed MF was granted based on findings from the  PROPEL study, which showed an objective RR in the transformed mycosis fungoides subgroup of 25% (n=3) per independent central review and 58% (n=7) per investigator assessment [14].

More recently, the antibody-drug conjugate brentuximab vedotin (Adcetris®), which targets CD30+ cells in CTCL, was approved. Approval was based on results from the phase III  ALCANZA trial, in which brentuximab vedotin demonstrated superior efficacy to standard-of-care therapy such as methotrexate or bexarotene, with durable responses [15].

In 2018, mogamulizumab (Poteligeo®), a humanized immunoglobulin G1 monoclonal antibody that targets the C-C chemokine receptor 4 (CCR4) expressed on CTCL cells [16], was approved for MF and SS patients who have received at least one prior systemic therapy. The results from a pivotal phase III study showed that mogamulizumab reduced the risk of progression or death by 47% compared with vorinostat [17].

A multitude of therapies with novel mechanisms of action as well as new combinations are also being investigated in ongoing clinical trials for advanced-stage CTCL.

Importantly, the genetic classification of CTCL was recently created by compiling and analyzing raw data from 139 CTCL cases from seven deep-sequencing studies of MF and SS [18]. Analysis revealed significant mutual exclusivity of mutations and disrupted pathways in CTCL. Importantly, in SS, mutually exclusive mutations occur in the NFkB pathway genes PLCG1, CARD11, TNFRSF1B, and KIT. This has important therapeutic implications as it suggests that selective targeting of patient-specific mutations may direct future therapy. That is, agents like proteasome inhibitors or JAK inhibitors that target specific pathways may be optimally used in specific subsets of patients. Further tests are needed to validate this genetic classification system as a tool for guiding future therapy.

CTCL is a challenging disease to treat, and current therapy focuses on preventing progression rather than curing the disease completely. The number of available treatments has increased in recent years and the future is promising as yet more new classes of drugs and novel mechanisms of delivery are being explored. In particular, the development of the genetic classification system for CTCL may allow for selective targeting of therapy to patient-specific mutations.